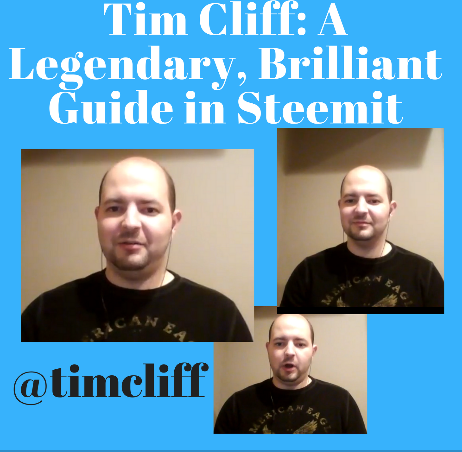 Building great content on social media is critical for your success. You need to craft compelling content (nice alliteration, huh?) to get people to pay attention to you and ultimately to get involved with you, your products and/or services.

Just Recently I had the opportunity to interview one of the top producers and income generators on the platform steam it. HeIs the man who knows what he’s talking about and he has a gracious, kind, giving spiritAnd is helped many people, including me.His name is Tim Cliff and he goes by the moniker on Steemit @timcliff.

Here’s the link you’ll need to read about it on Steemit. Tim Cliff (@timcliff) shares a wealth of information on this. It is like sitting at the feet of a brilliant professor letting you know how he makes a lot of money and how you can do it also. This is one you’ll want to watch, take notes, and go over the instructions a few times.

Please leave a comment and let me know what you think. I look forward to hearing from you!

Terry Brock
Hall of Fame Keynote Speaker, Master of Ceremonies and Social Media Marketing Speaker. Terry Brock brings a passion for technology, a sense of history, and real-world business strategies for success to everything he does in a fun, entertaining way while providing real-world solutions and results for those in his audiences.

Are you looking for a speaker that will add the perfect spark to your next event? Or an author for your next bestseller? Or maybe a technology coach to help you reach your next big goal. Contact Terry and let’s see if he’s the right fit!

International Hall of Fame social media marketing speaker, published author and coach Terry Brock brings a passion for technology, a sense of history, and real-world business strategies for success to everything he does.

Get Terry for Your Next Event